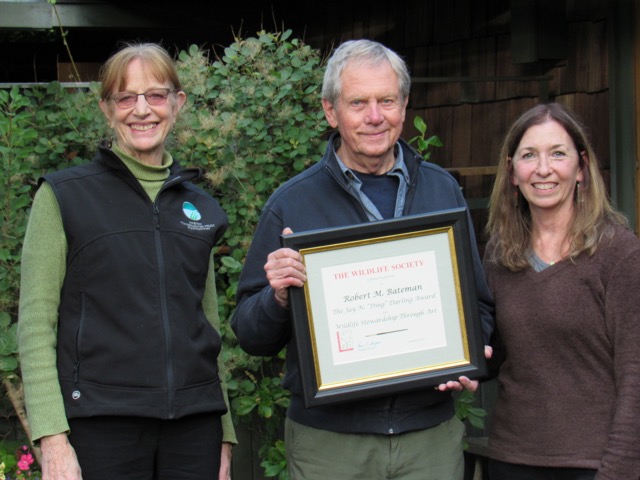 “It was a magical meeting!” said Kessler, who spent the day with Bateman and his wife Brigit.

Bateman received the award for his nature and wildlife-themed paintings. His painting style started off as abstract, but in the 1960s, he changed his style to realism. Around the same time, he began traveling around the world—to Africa, India, Southeast Asia and Australia—where he painted and sketched the wildlife and natural elements he saw.

Bateman’s art soon gained him the recognition of the Smithsonian Institution as well as the recognition of the Audubon Society of Canada when they declared him one of the top 100 environmental proponents of the 20th century in 1999. The use of his art to promote wildlife conservation earned him this award from The Wildlife Society.

The Jay N. “Ding” Darling Award, created in 2015, recognizes artists who, like Darling, promote wildlife and habitat conservation through art. Darling did this through creation of the Federal Duck Stamp Program, his broadly recognized cartoons advocating for wildlife conservation and other recognized work.

Bateman uses much of his artwork to fund conservation efforts; and he serves as the honorary chairman of the Bateman Foundation, a conservation group founded in honor of his life and work.

Artist and conservationist Maynard Reece was the first-ever recipient of the Jay N. “Ding” Darling Award for Wildlife Stewardship, an award named in honor of his mentor. Image courtesy of the Maynard Reece family.

Maynard Reece was 18 when he met famed wildlife artist Jay N. “Ding” Darling. An aspiring artist, Reece showed up with some of his paintings at Darling’s office at the Des Moines Register, where Darling was a Pulitzer Prize-winning cartoonist.

Darling took a look at them at the work and turned to Reece. “Well, I can tell you they’re nice,” he said in his characteristic gruff manner, “and that won’t help you a bit. Or I can tell you what’s wrong with them.”

“I want to learn,” Reece told him.

With that, Darling became his mentor. “Let’s get to work,” he told Reece.

At 96, Reece, of Des Moines, Iowa, has dedicated a life to art and conservation—causes his mentor shared—so it’s fitting that he was named the first recipient of The Wildlife Society’s new Jay N. “Ding” Darling Award for Wildlife Stewardship. Reece received the award, which included a paintbrush used by Darling, at the 23rd Annual Conference in Raleigh, NC.

The new award seeks to honor Darling’s legacy by recognizing an outstanding work of art or an artistic entity that furthers wildlife and habitat conservation through art.

Those two passions have driven Reece, who said it was Darling who inspired him both as an artist and conservationist.

“Darling told me of things back in history when wildlife was abundant in many parts of the country that I would never be able to see, which we don’t have now,” Reece said in an interview for the documentary America’s Darling: The Story of Jay N. “Ding” Darling.” Throughout his life, Reece joined numerous conservation organizations and has donated much of his artwork for fundraising, said Patricia Fralick, a producer of the film, who nominated Reece for the award.

Reece credited Darling with encouraging him to enter his first Federal Duck Stamp competition, a competition Darling started. Throughout his career, Reece won the competition a record five times and said Darling instilled in him a careful attention to detail in his art.

In Darling’s farewell cartoon upon retiring from the Register, the artist included many of the things that were important to him. That drawing including one of Reece’s paintings, Reece said.

“It proved that he had a sincere interest and enjoyment of my work,” he said.

Darling wasn’t alone. Reece’s artwork has remained popular throughout his life. He has painted over 35 wildlife designs for state, federal and conservation programs. His work has been published in various magazines including Ducks Unlimited, and he has illustrated numerous wildlife books.

“Maynard is recognized as one of the most prolific sporting artists of our time,” said Ducks Unlimited Executive Director Dan Thiel, who credits Reece’s artwork with generating over $1.4 million for the organization.

The Jay N. “Ding” Darling Award for Wildlife Stewardship through Art was created in 2015 by The Wildlife Society and Sam Koltinsky, a nationally recognized Darling expert, to honor Darling’s legacy of artwork and conservation measures.

Darling was an honorary member of The Wildlife Society and the first recipient of the Aldo Leopold Memorial Award, TWS’s highest honor for distinguished service to wildlife conservation.